Bad Movie: The Devil Inside

The Devil Inside, directed by William Brent Bell and co-written by Matthew Peterman, is the first of less than mediocre movies that reached the top spot at the box office during 2012. I know some Oscar bait has a longer run in the theatres than this movie, but I’m reopening wounds by reminding you that it still exists.

Ms. Rossi (Fernanda Andrade) tells her story to a man filming a documentary. Her mother (Suzan Crowley) is in some Italian insane asylum run by the Catholic Church (?). When in Rome, she meets these two priests in a…University class about demonic possessions? I’ll keep an open mind because that’s what some people think about psychology then and now. In fact, exorcism was probably the norm before mental wards came into being. During the class and apres coffee-bar meetings with some of the actually enrolled students who are studying the occult.  She discovers that within her new circle of friends are two priests do exorcisms that are not approved by the Church because they believe that the institution somehow is corrupt enough to disregard the well-being of some people possessed by the devil. Knowing what these knights of shining collar do on the sidelines, she enlists them into healing their mother.

But when they try to exorcise Mrs. Rossi, the devil jumps bodies from her to young renegade exorcist Father Keane – he doesn’t show symptoms until he drowns a baby. Then the devil goes to the young woman then to the man filming the documentary. This last possession leads to a anticlimactic ending. Which is unfortunate because they are going somewhere where their questions could be answered. Let’s look at what I said before. The devil jumps bodies, which means that the priests’ exorcising methods aren’t sufficient enough in extinguishing the evil entity possessing a person. The exorcists justify their actions, by saying that they’re spiritually healing certain cases that the Church considers as irredeemable. But what if the Church was in a way protecting those who could be saved, as they quarantine the possessed away from everyone. One body isn’t stronger than another so what’s stopping it from possession a holy man? 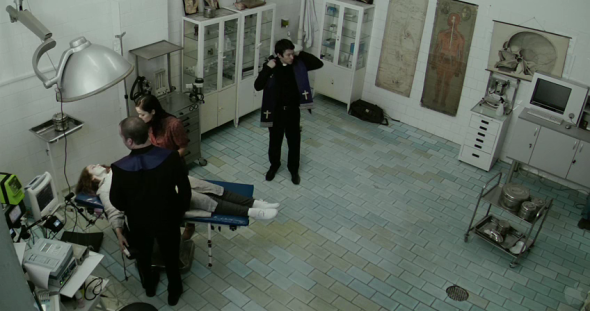 Despite of me trying to dig something into this movie, it’s constricted from expanding its ideas about the devil and God and people. And it might be because it set itself too low, choosing too small of a canvas and characters to tell their story that’s not really profound. 2/5.