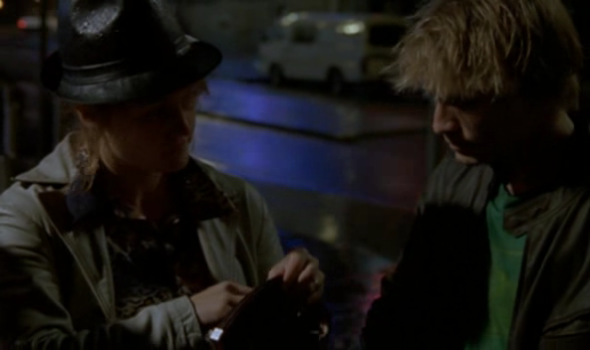 I should not read too much into the moment in the Dardenne brothers‘ L’Enfant when one of Bruno’s (Jeremie Renier) contacts tell him ‘People pay to adopt, if you’re not up to it.’ The neon lights flicker from a bar across the street, as if subtly marking temptation’s introduction. The first fifteen minutes show Bruno exchanging objects for money and it doesn’t take long to attach that moral relativism towards another human being. Besides, his newborn baby can’t verbally object. Also, critics laud the film for its lack of judgement towards its unlikable protagonist. A notary agent just does his job quickly and tells them to fill their papers unlike the condescending lab technician in Juno. But talking to that with that woman is the first subtle judgment of these unfit parents and many more are coming.

I’d assume that the film isn’t sold outside the art-Cannes crowd because the premise of the movie might make a layman’s blood boil. Or maybe they’ll just be saying he’s a boy and stupid, the premise thus might be more contemptible and thus more challenging if it’s the child’s mother, Sonja (Deborah Francois) starting the bidding.

Anyway, to finish his goal, Bruno spends most of his time with his ‘mobile,’ waiting in rooms, waiting for other people or all the above. From the fourth minute mark the film is solely seen through his experience and the film sticks with that. Showing only his side and perspective of the conversation, we instead believe that money or the baby are going to show up or that his mother is on his side when the police might ask her questions about the infant. Sometimes his contacts asks for more but there’s no kind of shirking seen here. Despite being a callous liar, his trusting nature is admirable. There’s also a sense of community in the film, a shelter that extends their time to put a roof under a child, a hospital at arms when Sonja reports him to the police and Bruno in the end, through altruism, doing what’s right.

This entry was posted on July 17, 2011 by paolocase. It was filed under Movies and was tagged with 2005, bad parenting, Belgium, Dardenne brothers, Deborah Francois, Jérémie Renier.