Shot: Beauty and the Beast

I don’t get my movies in reputable places, so when I got my copy of Beauty and the Beast and started watching it, I thought it was colourful, suspiciously colourful. The film tells its prologue through a series of stained glass-like representations, my best shot is that of the haggard woman turning into a beautiful fairy. There’s something both pre-Raphaelite about her even if she also anachronistically looks like a 20-year old version of a “Powerpuff Girl,” her flared sleeves suggest a sweeping action just like the cartoons that would come a decade later.

This prologue is also the reverse Snow White, where young people who live by themselves have to be suspicious of old haggard women because they can kill or turn their victims into a half-bulldog, half-lion. The transfiguring women also bring objects that are physical manifestations of sexuality. While the stepmother’s apple overwhelms the daughter who’s too young, the rose can mean many things, reminding him that beauty, just like the rose, can be gradually destroyed by time, or by its own frailty. The haggard woman tires to offer the rose to the prince in exchange of shelter, as a way of saying that beauty can be used as currency and whatever else that implies. And of course, the stained glass medium, normally used for Christian imagery, is now depicting a fairy tale.

I don’t know why I assumed that the colours in this film would be duller. Maybe because the colours feel penciled in. I’d assume that watching this movie for the third time is what it’s like to see the Sistine Chapel after it’s been cleaned off of centuries worth of grime. It’s like seeing something as crisp as it would have been twenty years ago.

This is my second favourite shot. Instead of Belle’s mustard dress, I keep seeing blue throughout this movie. This shot also conveys the palace’s large space. It’s strange to see Belle and Beast within the vast palace, but when not when Gaston is looking for him. As if the couple is overwhelmed or understand that space while Gaston waltzes in without any decency. Speaking of which, I would like to congratulate Disney for being ahead of their time, since this movie’s villain comes from one of the most reviled groups of people for the past decade – juiceheads!

Since I like pictures, here’s a Busby Berkeley-esque musical interlude, the most uptight one getting to sing a few verses.

Gaston’s lynch mob for the Beast, looking Fantasia and all. 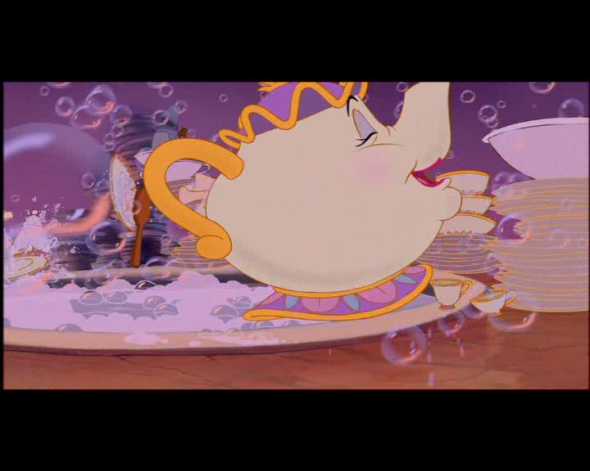 And Angela Lansbury. This post is part of Nathaniel R’s ‘Hit Me With Your Best Shot‘ series.

This entry was posted on April 13, 2011 by paolocase. It was filed under Movies and was tagged with 1991, Angela Lansbury, animation, best shot.