I work in a ‘cheese factory,’ where it was magazine day on Monday and Limitless stars Bradley Cooper and Abbie Cornish are on the cover of next month’s “Marie Claire.”

This is on the buy list, after the Wasikowska ‘W’ and the Rihanna ‘Vogue.’ This is also on the buy list even if I’m more than five years too young for the magazine’s demographic. Just saying.

My review for Limitless for Anonymous Material (Sam did it better) went online yesterday. Sam has second thoughts about NZT, I called shenanigans on Eddie’s career change, and I have another one.

Carl van Loon asks Eddie Mora (Bradley Cooper) – not to be confused with Edward Murrow – about how he knows which stocks are going to rise and fall and the latter answers something vague about knowing the algorithm of human behaviour and interests, helping him find out stock trends.

Why didn’t Carl’s (Robert de Niro) right hand man just ask Eddie about  the rise and decline of a specific stock? Carl is reputed to be a quiz master and trumps novices, and I wanted to see that in action. I would also rather be bored by a few seconds of expository dialogue than be left hanging. 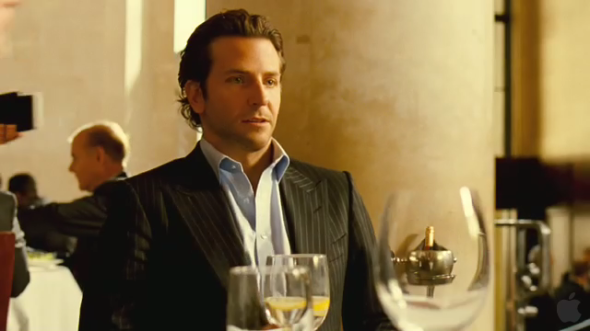 Or maybe the film’s worldview chooses determinism over free will, Eddie knowing that every company or honcho has its time. He can’t pretend to have all the answers in case one of them bites him back. The film ends with Eddie bragging about how he can see 50 scenarios, knowing how to beat someone with their first move. ‘Why’ is, then, an inferior question compared to opportunities he can grasp from the said scenarios.

The assistant instead just calls Eddie a quack. It’s easier and time efficient to dismiss someone than to further test him.

I also like what it does with the idea of knowledge, that Eddie laces it with his own opinions, as he does with law theory and Renaissance European imperialism, the latter a reference hinting to the volatile nature of the Wall Street culture that Eddie is getting himself into. Spoiler, but Eddie’s victory has little to do with whether what he’s saying is right.

Or that there’s no rift or resentment between old ascetic Eddie and new suit Eddie. Being a few years younger than Eddie, I should prefer the old one over the new Wall Street one but writer artsy types are only tolerable if they’re successful and/or content. Or do director Neil Burger and his writers Leslie Dixon and Alan Glynn think that old Eddies can’t be successful? This is a B-movie, I should stop thinking too much about it.

This entry was posted on March 24, 2011 by paolocase. It was filed under Magazines, Movies and was tagged with 2011, Abbie Cornish, Anna Friel, Bradley Cooper, Caroline Winberg, Marie Claire, Robert de Niro, sci-fi.