Alien Resurrection vs. Freddy Got Fingered

I’m writing about these two movies because of Andrew Parker’s Indefensible series, as he presents films that respected Toronto film critics will publicly defend. Among the trailers they showed before showing Alien Resurrection are the worst uses of a recent Oscar winner, a trailer of a vehicle for a guy who’s winning now, and another of the Chad (Tom Green).

Alien Resurrection falls within the wrong hands, with the writer of Buffy the Vampire Slayer and the director of Amelie. I asked critic John Semley about ‘race,’ which is the wrong word to describe the relationship between Ripley Clone #8 (Sigourney Weaver), the aliens, the crew, the space pirates (including Gary Dourdan and Ron Perlman) and a robot (Winona Ryder). Three of those groups work against the aliens and get out of the mother ship. Every alien or monster movie is practically a metaphor for race. The proper word is the ‘other.’ I didn’t want to be that guy in the theatre bringing up film jargon and taking a genre movie too seriously. 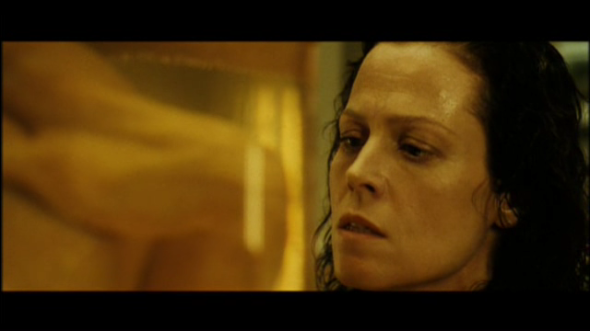 Anyway, Alien is a perfect movie because of its evocation of a style and simplicity, making the aliens mere intruders. The token mad scientist (Brad Dourif) disciplines the bred and captured aliens makes an even relationship between human and alien. Both perform unjustified violence against each other instead of only one side doing it to the other. The first scene of the film shows the scientists perversely fawning at her, calling her perfect. Watching Ripley eventually look at botched clones and imperfect versions of herself, and having to kill those clones out of disgust on what the scientist have done to them, and how perfection is achieved, and how people draw lines against each other.

Old adage says that  Weaver hasn’t been good since The Ice Storm (released in the festival circuit earlier that year) an opinion she shuts down by elevating the film through moments within her performance. Half of the movie is ridiculous, culminating in a confrontation inside a smaller spaceship between Ripley and an alien who is also technically her son. John Semley made fun of the alien son being made of oatmeal, and watching the crappy special effects of his innards being splattered throughout outer space, but we go back to Ripley’s face, and Weaver’s sincerity and mourning doesn’t seem laughable nor out-of-place.

So what do the movies have in common? Well, viscera, inter-species relationships, parental relationships and the name Betty. The name of the pirate ship in Alien Resurrection is Betty and Freddy Got Fingered‘s protagonist Gord (Green) has a girlfriend named Betty (Marisa Coughlan). Trailers before Freddy Got Fingered include Arnold making fun of himself and a reason why I respect Chris Evans and Jamie Pressley.

Show two gross things, put one random image or plot point after another and 51% of us will be laughing. Every shock comedian probably knows this. It’s like the animation company’s CEO’s (I still don’t understand when Anthony Michael Hall became sexy) reaction to Gord’s father (Rip Torn), the absurdity of the violence is so physical that it seems measured and entertaining. What does a girl on a wheelchair who likes forced fellatio have to do with the Eiffel Tower? And why does Tom Green play a piano sausage and be called crass and excessive, yet when Dali and Bunuel put dead donkeys on top of a piano they’re called avant-garde? Well, even some critics looking at this film from retrospect have referred to it as a Dadist experiment. Its pacing is different. Neither does it compromise to make Gord cheesy and sympathetic like most gross out comedies end up doing to its protagonists.

I also love how Coughlan is the love interest instead of Green’s ex-wife Drew Barrymore, who instead plays a crazy receptionist. Drew’s sunk to a lot of depths but she wasn’t gonna permanently sabotage herself with this one. Well played. Coughlans’ the MVP of this movie. I’ll always have respect for Tom Green as with any guy who pronounces his T’s (I’m starting to notice that comedians and comic actors today have better enunciation than dramatic ones). Everyone else plays one note that go well together in this skull-beating symphony that is Freddy Got Fingered.

Oh, and after the movie, Mr. Wilner started impersonating Tom Green impersonation as if he’s fighting for the film’s final cut. That was great.