Iron Monkey on morals and men

Iron Monkey has a pace that I’m not used to. It’s a story about the titular Iron Monkey (Rongguang Yu) whom a 19th century municipal Chinese government is pursuing because he’s stealing from them and giving the money to the refugees. It moves from drama to fight scenes to slapstick to ridiculous sadism to showing beautiful Chinese architecture all within the same scene. Some of Iron Monkey’s fight scenes have comic interludes on them, throwing rocks at those who deserve it or kicks and stands on them as if slapping or disciplining them. And if this martial arts movie looks like it has enough on its plate, there’s romantic tension and foodie moments in there too. 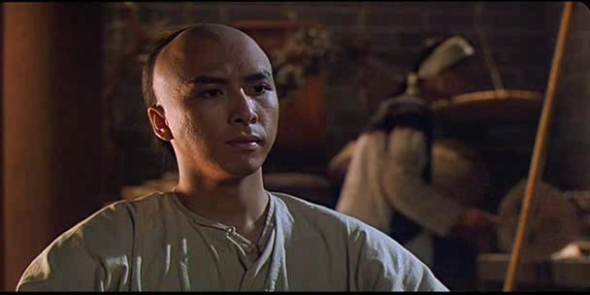 It isn’t until half an hour into the movie when I realize the film’s moral ambiguities. Wong Kei-Ying, (Donnie Yen) a man trying to arrest the Iron Monkey, is trying to buy food only to be turned away repeatedly. A vendor who sells him food in the hush-hush gets stuff thrown at him. Yes, Wong is more fleshed out as a character than the vendors, but it’s not that either’s fully in the wrong. The vendors snub Wong out of loyalty to the mysterious Iron Monkey, who brings them gold and defends them. Wong has to capture the Iron Monkey to get his son back from the government and believes the latter doesn’t help the situation and actually brings animosity between the government and the people. Then everything clicks. The film’s portrayal of early 19th century China is a country where children enslave each other. Iron Monkey, hiding as Dr. Yang, also contemplates surrendering to the police to save the boy even if his time in the dungeons mean that the refugees won’t be protected.  These characters, testing our sympathies actually make the film richer.

The film also has an interesting spin on masculinity as both male characters, adversaries and eventual friends as they are, are capable fighting machines who also know how to cook. Dr. Yang, and Wong also have a sense of community with the things I already mentioned. Not to mention that both fight for and against female characters too. This film of great fights, both internal and physical, end in a bigger fight involving bamboo poles and fires that’s both ridiculously lengthy and elegantly choreographed.

The Toronto Underground Cinema is playing this film tonight. They’ve managed to get a print with the original Chinese audio, even if , apparently, the subtitles are inaccurate.