Noir’s style to me is its ink-like darkness and shadows. The colourful L.A. Confidential doesn’t necessarily give you that mood, even the music isn’t as bombastic. When it comes to the visuals, its characters don’t come out like figures in a diorama like it does in classic noir. The rustic colours bring the past image of L.A. infrastructure and fashion to the present, and sometimes red pops out either on a female character’s lips or on her dress, or both male and female characters bled to death, reminiscent of the crime tabloids like the fictional ‘Hush-Hush’ featured in the film. It’s Christmas in Los Angeles after all, and everybody’s neon Christmas lights are up.

The film introduces us to main characters, the letters of their names appearing  obviously like it would on typewritten paper. Officer Bud White (Russell Crowe) ‘has a thing for helping women,’ is a guy who gets attention through his tough demeanour, relegated through errands. Sgt. Jack Vincennes (Kevin Spacey) is a detective adviser for a TV show, ‘Badge of Honour,’ with swagger of a narcissistic cop. Sgt. Ed Exley (Guy Pearce), is a young cop whose father has also been in the business whose superiors think is too clean-cut to be detective. There’s a fourth character who doesn’t get captions – Lynn Bracken (Kim Basinger), groomed to look like Veronica Lake.

Their lives are getting more intertwined as two criminal cases come up. The first is a beat-down by multiple officers including White and his partner Bud Stensland against six Mexicans – some racist cops call them ‘spics’ or ‘Poncho’ – probably wrongly jailed for killing a fellow officer and injuring another. The second is a shooting in the Nite Owl that leads to more deaths, more crimes revealed and more tarnished reputations.

The interesting visuals come up fifteen or twenty minutes after the film begins. Crime lord Mickey Cohen’s henchmen and potential successors slowly get mowed down, like Deuce Perkins. Smoke and dust clouds appear occasionally on the screen. When Perkins gets slain, the glass in his house shatters and smoke builds and thins out, two men in the background walk away. A vehicle on the outskirts of the city drives further away. Little trails as White sneaks into a suspect’s house. Police cars approach Exley after a deadly final shootout.

While Vincennes reluctantly agrees to snitching Stensland about the ‘Bloody Christmas’ incident, Exley watches from the adjacent room, his reflection on the screen like an omnipresent reminder. More mirrors appear in this film. One where Vincennes looks at himself before going to a motel to find a young actor murdered. There’s another mirror again between Exley and those observing him after the big shoot out, Exley only able to see his own reflection. The observer’s reflections are bigger, but he’s able to bridge the gap, telling them his conditions. 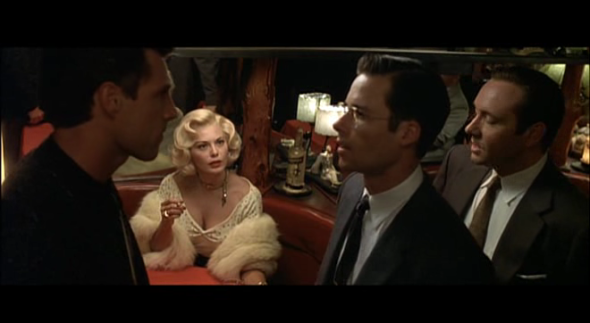 Lynn – a threatening figure who becomes White’s girlfriend – and other women’s looks have symbolic attachments. She belongs to network of prostitutes groomed, cut and dyed like the era’s movie stars, and tells White that this at least lets them act. Exley mistakes Lana Turner for a prostitute cut to look like the actress. White sees a woman with a bandaged nose, assuming abuse on a woman who has undertaken plastic surgery, commenting on the practice itself. The bandaged woman becomes a Nite Owl victims, a cop comments that she looked like Rita Hayworth, funny since a Margarita Cansino underwent operations to become Hayworth. The film ends with Lynn voluntarily changing herself to look like Marilyn Monroe, the latter herself is a dyed and cut creation of Norma Jean and Hollywood. Prostitutes are actresses are girlfriends, their physical changes mark the times their and their society’s attitude change from urban mystery to an optimistic, domestic retreat. 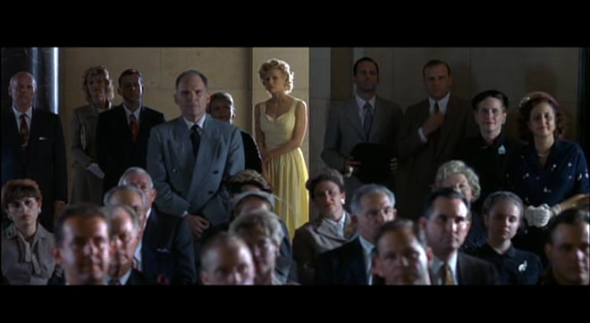 This entry was posted on February 7, 2011 by paolocase. It was filed under Movies and was tagged with 1997, Guy Pearce, Kevin Spacey, Kim Basinger, noir, Russel Crowe.