The audience can feel the paper where The Illusionist is animated, but on other moments, its colours and shades has its own energy. The film’s usual colour scheme consist of shades of brown, from the titular illusionist Tatischeff’s raincoat to the brownstone streets of the cities where he moves around to do his work. Paris, London, a Scottish town, and Glasgow, where the second half of the film is set. Smoke and cloud travel through the screen weightless like in Miyazaki’s animated films. My favourite part of the film’s aesthetics is when the bluish nights are interrupted by the yellow city lights gleaming from Glasgow’s boulevards. Sylvain Chomet’s film gives us what Impressionist or German painters would have delivered if they knew how to fly. I guess the lines are too fine and colours too full to evade those influences. 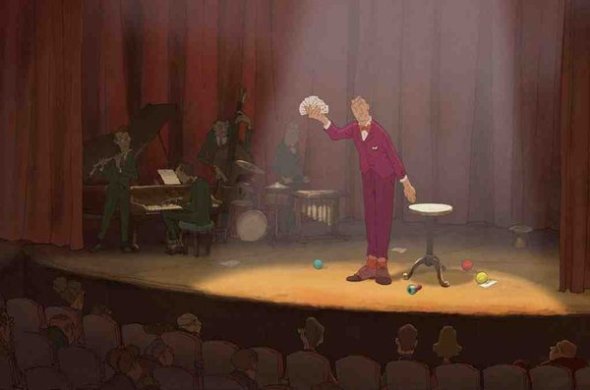 Tatischeff and this film becomes a symbol of the uphill climb involved in preserving tradition. His Parisian audience is apathetic towards his tricks. It seems like he isn’t the perfect guy for the stage neither, his head being caught on the curtains. In London, an audience of two, the only ones left after a pre-Beatles band finishes their set. He also has to contend with drunks in parties where he performs. The drunk does give him a card of a pub is Scotland, a long travel through land and water until the fog seamlessly clears, seemingly greeting the man who’s small compared to the mountains. Here they laugh and clap at his jokes, but the crowd, with their pints of beer, look like they’ll cheer on anything. Tatischeff, who seems to have no other job skills, is thankful enough for this full venue. 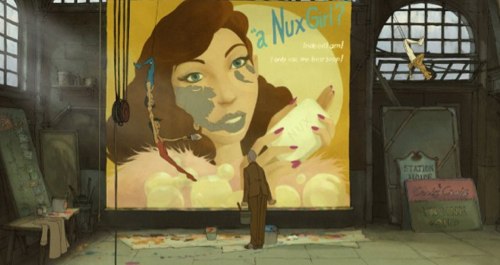 The llusionist is adapted from the last, unfilmed script from French auteur Jacques Tati, and this film is then technically my second Tati. Instead of a relationship between an older yet childlike man playing innocently with children, this film deals with a surrogate parental relationship between an older man and an ungrateful adolescent girl growing up, finding their way from the small town to Glasgow. Both face the world’s volatility in the late fifties, her moving within the urban, fashionable world and him coping like the other struggling vaudeville acts living in the same hotel. This film differs from my first Tati, Mon Oncle, with this film’s grownup sensibilities. The material even feels sad to have grown up. It’s depressing enough not to make me love the movie, but I respect how it boldly faces this reality nonetheless.

I saw this film in theatres, with a small, weeknight crowd of a handful of post-hipster couples, appreciative of the film’s nostalgia. The film ends with the city lights all slowly turning off, but I know there are people who will hold on to the film and its old-time charms. 4/5