Somewhere is an interesting look at movie star Johnny’s Marco’s (Stephen Dorff) busy schedule. He’s promoting his latest movie while being the target of snide remarks from his costar (Michelle Monaghan), getting a make and make-up for his next role as an older man, going to Milan where he’s revered and where we learn that his CV includes Pacino and Streep films. With the good comes the bad, breaking his arm at the Cheateau Marmont while wasting his money renting a hotel room there, his many exploits, looking like crap – impractical yet fabulous taste in footwear aside – and not even dressing properly at press conferences and photo shoots. In other words, looking at an actor’s precarious career and lifestyle.

It’s interesting to see Cleo (Elle Fanning) behave towards his Johnny. She gets visitation rights with him during weekends, he doesn’t know that she has been ice skating for three years (although that could be mom’s fault), she has to tell him what “Twilight” is, he sneaks girls into his hotel suite in Milan even if she’s sleeping in the suite’s bedroom. Later on, in a teary scene, we discover that Cleo’s mom is going away and the latter hasn’t revealed when she’s coming back. Her parental situation and upbringing is just as precarious as Johnny’s career, thus the film’s title, Somewhere.

Let’s go back to Milan scene, shall we, as it develops to the morning after Johnny’s tryst with the Italian woman. The woman tries to open up to Cleo, asking her questions about boyfriends and telling Cleo stories about her young love with a scooter. Johnny finally joins the two on a breakfast table, Cleo darting looks of anger towards her father. That one moment is the angriest she gets because she doesn’t seem to harbour ill will against him for the rest of the movie. Well, he does hang out with her a lot. The film also makes it seem that despite the lack of time normally spent between the two, they don’t seem the need to reacquaint each other of their new activities. They communicate instead through playing Guitar Hero or playing tea-time at the bottom of the Marmont swimming pool, the two then having an esoteric language to themselves. Her treatment of him is a mature decision for an 11-year-old to make. 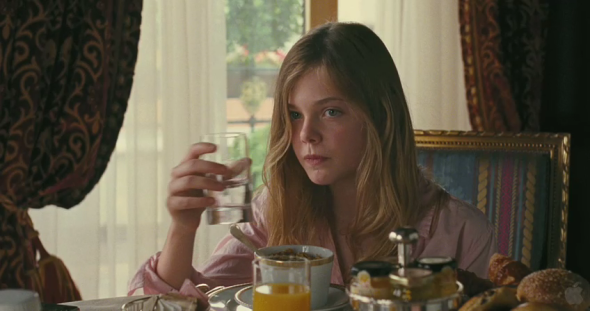 The film brags cameos from actors like Louis Garrel and Benicio del Toro, but I’m more interested in the models. Erin Wasson, Angela Lindvall, Maryna Linchuk, Meghan Collison, Jessica Miller (who?) Nicole Trunfio (the brunette woman with the red biniki staying below his Marmont suite). I couldn’t recognize them until looking at iMDb, and it’s sad that I haven’t been connected to the fashion model world.

This is getting…somewhere. The first half of the film especially shows writer/director Sofia Coppola channel the male gaze through Johnny in his (spatial) relationship with these women. There are exceptions to the gaze and gender divide, when Johnny watches a documentary about Gandhi without feeling a slight tinge of empathy towards the great man. Nonetheless, he lights up like a little boy when he watches the twin strippers’ second number (I didn’t know the Foo Fighters and Amerie were stripping music. I also didn’t know that Coppola’s taste in music got more populist/terrible and I do like Amerie). He ignores the three models with black couture gowns, the models then like ghosts in the Marmont hallway. Someone ‘sexy’ pops by now and then while Cleo’s around and we as an audience is anxious that he’ll be seduced away from his daughter’s attention. He watches Cleo’s ice skate routine as an obligation, but marvels at her classic, fragile beauty when she comes out in the gown for the Italian awards event.

Watching him enact the male gaze is interesting since he is an actor, and his job description means people looking at him. He worries when the gaze is shifted back towards him, asking his daughter to watch out for black SUV’s – she tells him that there are lots of those cars in LA, which is weird because as an actor, he’s supposed to know those things. At a party, a younger actor asks him for advice while only half of the girls there give him any attention. He goes on stage in Milan for the awards event but is quickly pushed out to make way for a dance number led by the Italian girlfriend.

Somewhere is like watching someone who doesn’t feel comfortable with the spotlight, which come to think of it, is a recurring theme in Sofia Coppola’s films. Bill Murray’s character in Lost in Translation, Kirsten Dunst’s titular Marie Antoinette and Johnny are similar in this respect, where the gaze goes both ways between protagonist in a distinct civilization and said civilization’s distant and hostile habitants.

Hostile, however, seems to strong of a word to associate with Sofia Coppola’s slow pace and minimalist narration. The characters, even with Cleo’s warm influence, still feel cold and distant. It also feels laughable, because of the film’s content, that Somewhere‘s getting comparisons to other auteurs. The themes aren’t deep enough or are engendered too literally in the film, but I’ll feel obtuse if I ignored these themes since they take a bit to ferment and talk about. 3/5.

This entry was posted on January 20, 2011 by paolocase. It was filed under Movies and was tagged with 2010, Angela Lindvall, Elle Fanning, Meghan Collison, Michelle Monaghan, Nicole Trunfio, Sofia Coppola, Stephen Dorff.