I already complained about watching the Shrek trilogy on twitter and did it anyway. The sharp comedy that turned itself into a cliché simply by existing again and again and again. We watched the first one in Grade 9 religion class, I think. 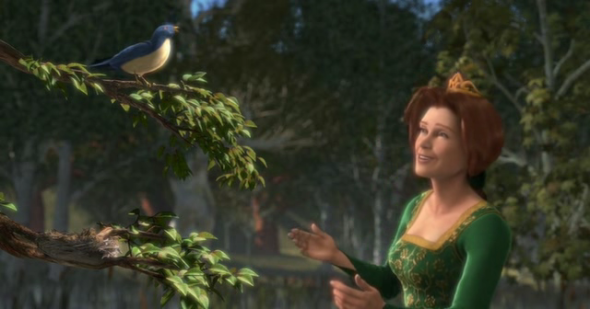 One thing about lobbing off one gag on top of another is that one will eventually make you laugh. Or that on repeated viewings, you’ll actually laugh about the one you forgot about. Such as when the recently rescued Princess Fiona (Cameron Diaz) opens the new morning with a series of vocalizations. She sings with a beautiful blue bird. We know what’s coming. She intentionally sings with such pitch and volume that the bird explodes. She takes the bird’s eggs, and there’s a mixture of solemnity instead of pushing the gag. And you know, Fiona the 0rge cancels out how this movie’s supposed to be about couples who don’t look good together.

The best in show/scene for the second installment goes to British comedy queen Jennifer Saunders, who plays Fiona’s fairy god mother. In order to get Fiona to marry her son, Prince Charming (Rupert Everett), she locks Shrek up on Fiona’s childhood bedroom. She mocks his cries out for her. Great delivery. 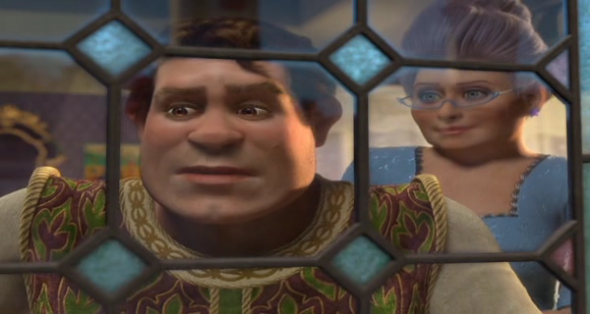 Ooh, Shrek the human’s (Mike Myers) kinda hot. Looking back two paragraphs ago, yes, it’s a sad North American staple for a hot woman to be paired with Kevin James . That got my weird brain to thinking about what my former prof said about masculinity being the absence of performance. Both in ogre and broad-shouldered human form, Shrek is more acceptable as a masculine figure. Especially than his arch nemesis Charming, one of the gags involve the latter whipping his hair, feminizing the character. Even Fiona sees something wrong with Charming, pretending to be the transformed Shrek, mugging for the citizens’ attention at her royal wedding.

The theme of the masculine duality between Shrek and Charming rides on up to the third installment. It makes sense that Charming’s in a fairy tale version of a dive bar until you really think about it. He thus tries to rectify that wrong by getting the other bar patrons, fairy tale villains, to sign up to invade Far Far Away. I mean, what’s stopping him? It’s not like Shrek can function in his royal duties anyway. 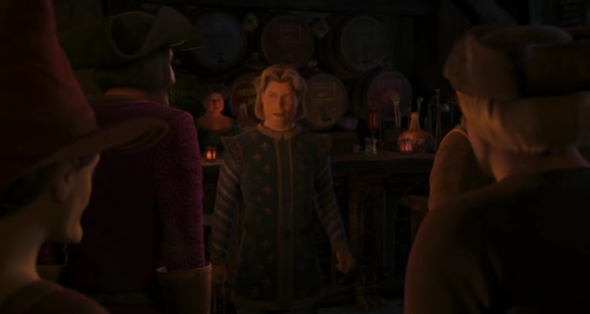 I like the first half of the third movie. It was my first time seeing it, so the gags feel fresh. There’s a feminist spin to it – as Charming rounds up the villains, Fiona rallies her fairy tale princess BFF’s, who are normally passive and wait for a…prince charming. This came out when I was in summer school. For a class I was watching some old movie either about the Algerian resistance or one about a depressed Senegalese maid. Yes, I could have rebelliously written an essay about either of those movies AND Shrek 3.