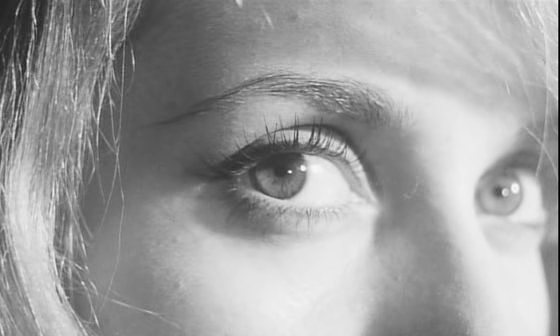 Repulsion‘s first few minutes might be mistaken for a Godard film. A young Belgian woman named Carole (Catherine Deneuve) works as a manicurist. After work, her effortlessly chic self walks the streets of London to softly energetic non-diagetic jazz music, guys both working class and skinny tie-wearers (Jon Fraser) hit on her. She often looks like she’s daydreaming, her voice evinces little excitement. Instead of Carole’s politics, director Roman Polanski‘s more interested in the psychological conflict, which, in Carole’s case, is barely seen by the other characters until it’s too late.

Polanski doesn’t explain Carole’s building insanity in ways others have – relationship complexes, haunted histories, addictions. Instead, she notices a crack on a kitchen wall. Her sister’s (Yvonne Furneax) boyfriend Michael (Ian Hendry) calling her ‘the beautiful younger sister,’ a throwaway comment that Carole interprets as a menacing sexual come-on. A night after he stays over for sex, she sees him shirtless and her sister asks her how she slept the morning after. She then takes those little things and associate them with nightmares, as I imagine most people in a state like hers do.

It’s easy to say that instead of being silent, Carole should say how she feels. However, the film’s  shows how words are inadequate since the other characters are reductive towards her. A customer tells Carole she’s in love – all problems are male related. Her boyfriend’s friends call her a tease. Also, her little acts of verbal resistance against her sister aren’t heeded. Her sister’s dismissal won’t help her talk about the terrible things she dreams about. I can’t settle on her real problem –  fear of men, an idle mind, wanting to be alone. In other words, the other characters often think of a quick word or solution for her, and these quick solutions don’t help her slowly progressing dementia.

At first underwhelmed by Deneuve’s deadpan line delivery, easily enough an aspect of her character. She then thrills her audience as she responds to the walls of her apartment, or attacking men as if she’s a sleepwalker, using candlesticks and books like I’ve never imagined anyone doing. It’s hard to understand her in the first scenes of the film, but she perfectly fleshes out a new breed of character in horror film. She’s a monster within the victim in a genre that mostly shows the monster as external and separate from the victim. Deneuve’s Carole is groundbreaking in this and many other aspects, an integral part of Polanski’s vision of the macabre.

This entry was posted on December 16, 2010 by paolocase. It was filed under Movies and was tagged with 1965, best movie ever, Burton Blitz, Catherine Deneuve, concrete jungle, francophile, Horror film, Ian Hendry, mental health in film, Roman Polanski.