Zangiku Monogatari – or translated in English, The Story of the Late Chrysanthemums – is about a young actor named Kikunosuke Onoue (Shôtarô Hanayagi), an adopted child of a fifth generation actor, Kikoguro (Gonjurô Kawarazaki). The rules of the game are nepotism instead of meritocracy, and Kikonosuke gets critiqued behind his back while praised in his presence. His brother’s wet-nurse Otoku decides to break that chain by telling him that her aunt doesn’t like his acting. From this revelation, the audience knows that these kids are gonna end up being together through thick and thin, but this isn’t your typical love story. It’s just as much about Kiku’s career, the battle and benefits of both nepotism and meritocracy as they unfold in 19th century Japanese metropolises. 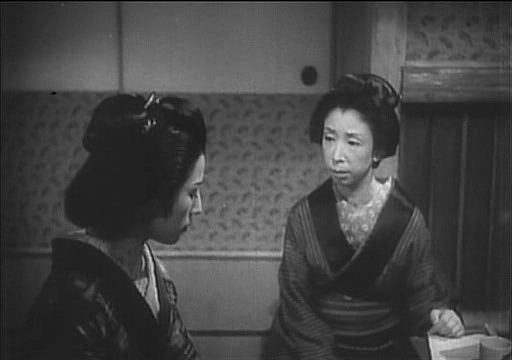 Mizoguchi makes the decision here to use wide shots and long takes. Yes, those long takes lost my attention span a few times, but they depict a city street or a room as a way of reminding us of the old form of the theatre. The characters are in the environment and we’re watching them for minutes without blinking, like we would on a stage. Their emotions radiating through the volumes of their voice, making close-ups unnecessary. Some of the low angles remind us of a view that a lucky audience member would have in a real theatre. Or medium angle shots between walls or tree trunks or plants, from the view of someone peeping into Kiku’s relationships and interactions with others. The most obvious instances of close-ups are of Otoku, either getting fired or reading a flyer promoting Kiku’s performance, and seriously thinking about going even if she’s forbidden.

Kiku chooses Otoku, making his surrogate father disown him. He has to go to Osaka where the competition for actors isn’t as bad. He leaves the theatre with no fans to greet him unlike the other actors. When Kiku’s family make a stop in Osaka for a performance, Otoku pleads for them to give him a chance. Kiku plays a geisha and kills it. The further the camera is from the characters, the more public the place is. That doesn’t stop Kiku from showing his joy to his father, as everyone else watches.

The actors recall the Kabuki acting of the era they’re portraying, complete with gestures and physical restrictions due to their costumes. Hanayagi’s acting choices are an acquired taste, being lifeless and wooden in the first act of the film, keeping in mind that he was playing naiveté and convinces the audience that he’s more than half his real age. He eventually evokes either mean-spiritedness or insightful pathos depending on his fortunes. The actress plays Otoku is the most consistent, caring and emotional, which counts for good acting I guess. Her heart breaks when he’s away from her, which physically manifests through illnesses. I do find her character too passive, altruistic, and distressed. Her sacrifice to petition for a better job for him doesn’t feel earned. What good does it do her that she’s a martyr?