It feels somehow mean that instead of writing about the aesthetic principles of an anime film like Hayao Miyazaki‘s Princess Mononoke, I talk about the voice acting. And it’s not the Japanese voice-acting too, which apparently can only be obtained through a year’s negotiations and waiting and that would have been too expensive. Yet, here I am. Not an expert here, but there is some Noh theatricality bleeding into the Japanese style of film acting down to Kurosawa. Having new, English-language voices then means starting from scratch.

I saw this movie with a friend who told me that Bill Bob Thornton plays a monk. Otherwise I knew nothing about the cast, so throughout the movie I keep trying to figure that out. Was that Tom Cruise as Ashitaka? Angelina Jolie as Lady Eboshi? Drew Barrymore as Princess Mononoke? Julianne Moore as Moro (actually Gillian Anderson)? Is my hearing that bad? 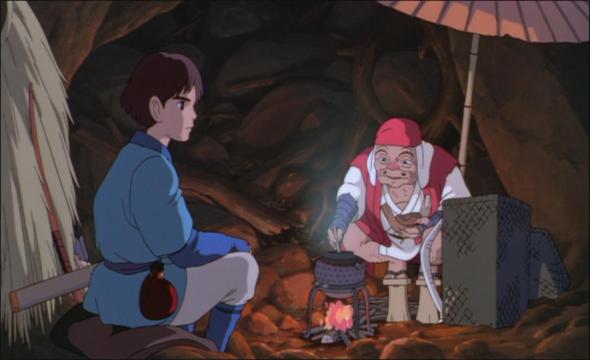 Growing up in Manila, I’m normally greeted at home by anime cartoons, most would have the typical character interpretations, the raspy angry voices of the old and the chipper sounds of the young. Not in the English-language dubbing of this film. At the same time, it’s hard to show the flexibility of facial expressions in animation, and the main characters aren’t drawn to move with large gestures neither. For example, Billy Bob Thornton‘s Jigo is raspy too, but looking like an old fat man he sounds neither. He instead makes Jigo sound like a cynic instead of a uniformly bad person I would have imagines in the supposed evil Western lands where Prince Ashitaka (Billy Crudup) is traveling. Jigo’s humourous even at the film’s most nerve-wracking moments. His realistic worldview makes Ashitaka realize that his quest as just gotten more complex than he might have expected.

And then there’s Minnie Driver as Lady Eboshi. She yells in her first scene. Otherwise, she doesn’t need to raise her voice in front of even the male soldiers. They just have her full attention. Despite laughing at Ashitaka’s face, she spends her night with him by explaining her herself without having to prove herself. She’s like a mother to the residents of her Irontown, later attempting to show her men how to kill a god. ‘The trick is not to fear him.’ Her calm demeanor makes us confident that she knows what she’s doing throughout the film.

Driver and Thornton’s characterizations stand out because they seem for the most part the exception to the rules that I forget that there are two performances that are. And I don’t want this to come across as scorn with praise. Anyway, there’s Claire Danes‘ Princess Mononoke/San, and it makes sense for her to yell through half of the film. San is Eboshi’s enemy.  She’s more confused and angry about Ashitaka’s ambivalent allegiances, because of her feelings for him. The deaths of her allies and the destruction of her world don’t help neither. The change of environment brings the worst out of her identity crisis, a human desperately wanting to fit in with her wolf family. Danes also interprets San as someone stuck in girlhood, that even her calmest line reads are filled with misanthropy and rage. 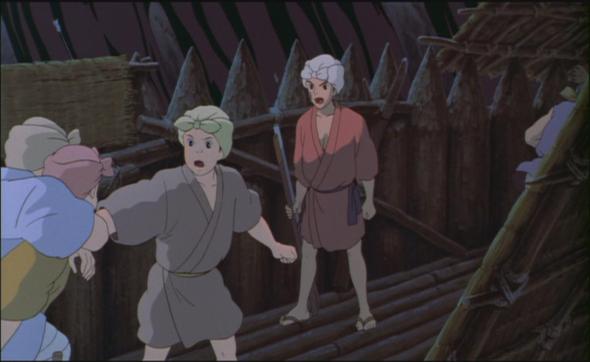 Ok, so maybe the older characters are calmer while the younger ones are more spirited. Which explains Crudup’s Ashitaka, but he comes across more as gallant yet commanding. Which doesn’t explain Jada Pinkett-Smith‘s Toki, a passionate character, loyal to Eboshi. She’s left alone with the other prostitutes to defend Irontown. She takes on herself as the character who leads the women out into safety, becoming as maternal as her role model. Pinkett-Smith as well as the other actors add a universality to this movie.

p.s. I know what I want for Christmas.

This entry was posted on December 10, 2010 by paolocase. It was filed under Movies and was tagged with 1997, Anime, Billy Bob Thornton, Billy Crudup, Claire Danes, Hayao Miyazaki, Jada Pinkett-Smith, Minnie Driver.