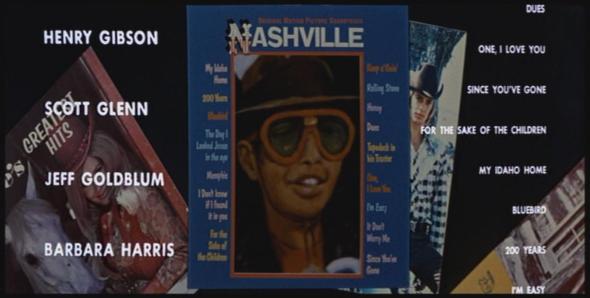 I didn’t realize I had to pay attention to the opening credits until I saw Jeff Goldblum’s name being read aloud. The worst part is that I couldn’t point him out in this ‘panoramic’ film until halfway through watching it. This is also the most creative opening credits I have seen so far.

The character in this film that had the biggest impression on me is Opal (Geraldine Chaplin), a BBC reporter. Nobody in director Robert Altman’s all-star cast films is cut from the same cloth as the rest, and each character is an outsider in their own way. However, there’s gotta be one character who really sticks out, although it’s debatable who it is in his films. In Gosford Park, in my opinion it’s Bob Balaban’s American vegetarian producer, in A Prairie Home Companion, it’s Virginia Madsen’s character. In Nashville it’s definitely Opal. In her first scene, Haven Hamilton’s cute-ish son Buddy (Dave Peel) kicks her out of his father’s recording and is forced to hang out next door to a session of a mostly black choir led by a white woman named Linnea (Lily Tomlin). Opal prattles on about ‘Keenya’ and the Masai, who if I’m right, should be way down lower in the continent. Opal tops it off with

Look at that rhythm, it’s fantastic. You know it’s funny you can see it’s come down from the genes through ages and ages and hundreds of years but it’s there. Take off those robes, and, and one is in, in darkest Africa you can just see their naked frenzied bodies dancing to the beat of…Do they carry on like that in church?

Chaplin’s usually quiet and reserved in other films in both English (Doctor Zhivago) and Spanish (Habla con Ella, El Orfanato). Here she plays against type but isn’t out of her element.

Interruption – Sueleen’s not that bad of a singer in this scene at least, serenading the Tricycle Man (Goldblum).

Interruption – LA Joan (Shelley Duvall) doesn’t look at the camera, Altman’s improvised 360 on character method at work. Duvall also plays a character that she isn’t that known for.My TA once told us that she was seen as a sex symbol of the 70’s, and really? First Farrah Fawcett RIP and now her? God old generations have weird tastes. Even Tom (Keith Carradine) from Tom, Bill and Mary is questioning that. ‘Jesus, you gotta stop that diet before you ruin yourself.’

Tom mows on to his path of asshatery by turning down a Hal Phillip Walker volunteer and ask a cute Sargeant (Scott Glenn) if he’s killed anybody this week.

Interruption – WANDA WANDA WHAT DIFFERENCE DOES IT MAKE IT WAS A HIT! Unlike my ironic appreciation of Opal, Lady Pearl (Barbara Baxley) is my favourite character in the film.When a fight breaks out in her joint, she calms the audiences down by screaming ‘I have two guns in here!’ She’s not always like that, however. She represent the Catholics in this city of many Protestant denominations, and in a later soliloquy she carries the heart that this film needs and that the other characters are not able to express by themselves.

Back – Opal’s in Linnea’s car, stuck in multiple car crash on the freeway. She’s exaggerating accounts on seeing limbs sticking out from the cars, talking about how America is about cars smashing into each other and complaining about how her cameraman isn’t here to capture the action. Linnea asks someone off-camera to get her some popsicle to combat Opal’s hyperventilation. She interviews Linnea and finds out that the latter’s children are deaf. Only she can react with insensitivity, irascible to Linnea’s pleas to meet the children and see their great personalities. For some reason the BBC’s human resources at the time is either dysfunctional or full of nepotism. She eventually moves on to Tommy Brown’s car. The man doesn’t know what the BBC is. The pre-interview with Brown is the least awkward of her encounters. Of course, she screws that up,

He must be a marvelous person because I mean to have all you lovely people working for him. I the South I know the problems of the South, you know I’ve heard of them.

Because it’s nice, the van plays into her obliviousness than set her straight.

Interruption – Smoking in the hospital. Classy. She’d rather flirt with Buddy than see her dying aunt, which is why she’s even in Nashville.

LA Joan and Opal are just two of the selfish characters in the movie. Nashville, as an environment, promotes narcissism and entrepreneurship. You can become a country western star, hang out with them or sleep with them. There are, however, hindrances to everyone’s ventures, who never get what they want as they have imagined it. There are limits to even the stardom statuses of Tommy Brown and Haven Hamilton, both powerless against the tests of time. I might also be stretching for a bit, but the offshoots of  narcissism is other minor character’s guttural need for self-sustainability – like the Tricycle Man drinking his own magic alcohol inside someone else’s establishment. But he, like the other characters, mean well.

Despite of this, there’s also no character who stands further aside from the rest, eviscerating them or putting the mirror in front of  their faces. And Tom and Sueleen’s boyfriend don’t really count because they only have one liners and they don’t change anybody’s perspective. None of these people are capable of doing so since everyone has their flaws. There are other reasons why such a character doesn’t exist in this film or any of the Altman films I’ve seen. Why admonish characters for going for what they want? For example, Winifred (Barbara Harris), pursues her country star dream while her abusive husband is always inches away. Or Buddy who went to Harvard law to please his father instead of singing songs himself. Arguably, those are more tragic scenario we would rather not see in place of what the other characters are doing. Besides, if a character goes against another for being selfish, he has to go against twenty-three other characters. Why tire yourself?

This post is overdue, having watched it almost two weeks ago. I’m letting the late fees ride out and I hope it’s not gonna kill my pocket. If I wrote my gut reaction to the film, it’ll be like ‘This movie’s long.’ Sitting on it, however, and waiting that long to write about it, made my ideas about the film ferment. It’s that kind of flick.