I’ll spill my thoughts about the themes of Buried after Blackberry joke number 1. Three bars on a Blackberry lasts two hours? I can make my Nokia my slave with four bars and it will survive a whole day. 2. The fact that it took Paul Conroy (Ryan Reynolds) to remember how to change the settings in a Blackberry either shows how agitated he is or that he’s poor and stupid. 3. If his kidnapper is so upset about his family’s death-by-bombing, he should be buying things other than a Blackberry and glow sticks. 4. The movie photographs Reynolds in a way that we both see the brawny adult that he is now and the buck-tooth kid he was in middle school. 5. Happy All Saints Day! End snark. 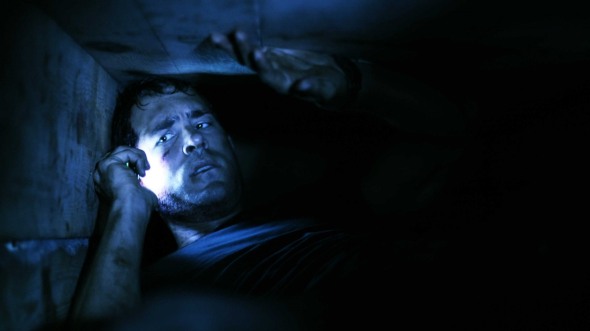 Buried‘s plot and character background unfold in slow bursts the same way that our protagonist  learns and reveals information, while said information is further frustrated by the darkness that envelops him in the first few minutes and threatens throughout the rest of the film. He’s inside a wooden coffin. He finds a Blackberry set in Arabic. He tells the people he’s talking to that his name is Paul Conroy, his wife’s name is Linda (Samantha Mathis‘ voice), he’s a contracted truck driver for a fictional CRT, stationed in Baqaba, Iraq. He’s still stuck in a box. 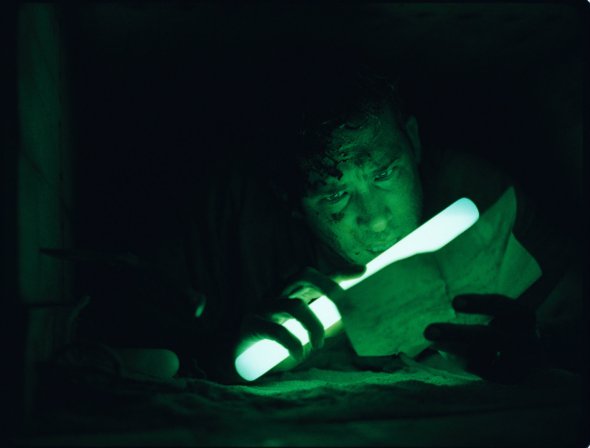 The second comparison is that like many Spanish films and Spanish horror/thriller films I’ve seen so far, Buried is also about an individual bravely challenging an undeserving authority figure yet is reliant and powerless against it. In his phone conversations, he yells and swears at his wife’s relative or friend. He calls his kidnapper a terrorist. The most interesting conversations he has is with a man from the state department. He accuses the man on the other side of the phone that the latter doesn’t care about him and makes many demands like asking to name one of the people the latter has rescued. Some have argued that Paul is a very entitled person, reminding the man from the State department that he’s an American citizen and of the urgency of his situation. He also expects his rescue to be quick, an expectation that goes hand in hand with an assumption that the department has more, better and quicker information and staff than he has. The man from the state department, in return, reminds Paul the irony that he’s also an individual with a different context and sets of information he has, just like everyone else Paul has talked to. The authority figures seem as limited in resources and capabilities, just like Paul.

The reason I bring this up is because the film touches on both claustrophobia and being buried alive, the subject inherently asking us the audience how would we behave in Paul’s situation. For some reason, already knowing the existence of this movie and the Tarantino-directed CSI episode, that I might be calmer, even more trusting than Paul. I know that freaking out and swearing at the outsourced customer service on the other side of a hotline isn’t gonna do me any good. I’m one of those people who will submissively take every passive aggressive comments or ‘we are doing everything we can to help your situation.’ It always takes me aback when somebody barks at people or does so consistently for two hours. However, I’ve never been stuck in a box. 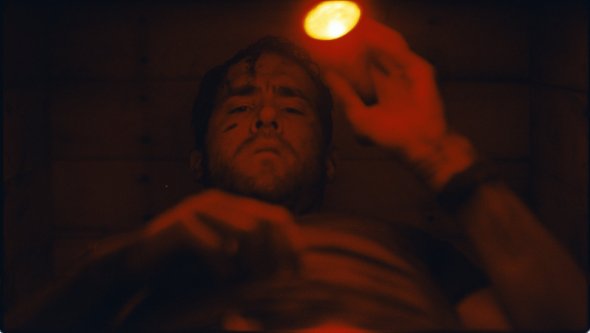 Anyone’s opinion on the movie depends on what kind of ending they’ll like or accept in a film, whether he or she want realism or tragedy or relief. I’ll return to individualism and irony in the film’s final revelation, that the state department ends up finding someone else also buried alive whose name happens to be the one they give to Paul. His entity as an individual has been his fighting chance for others to rescue him, but the Iraqi leading the department to a ‘burial’ site has led them to the wrong American, despite his intentions. Both Paul, despite his cries for help, and the state department remember that there are others like him.

This entry was posted on November 1, 2010 by paolocase. It was filed under Movies and was tagged with 2010, Iraq War, Ryan Reynolds, Samantha Mathis, thriller.