I wanna start this post with a little farewell. 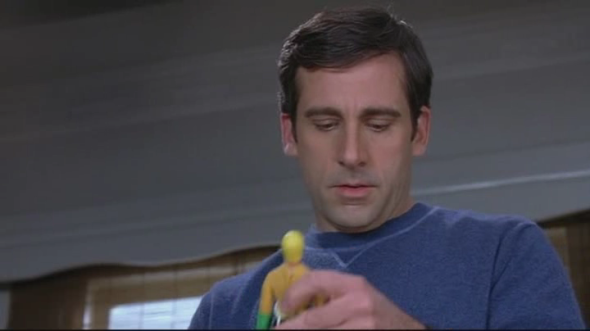 Aquaman, with gloves on. I’ll send you on a farm, with lots of land so you and other Aquamen can run around. Play in the aquafields.

For some reason, I thought of that line as Steve Carrell making fun of his character, Andy.

And before I start talking about the scene, I just wanna air our a ‘style guide’ item. Do not call a woman or a female character shrill even if. Ever. It’s like calling a black person or character articulate.

But here I am sort of breaking my rules by talking about a scene in The 40 Year Old Virgin, where we’re a few generations after free love but we still have problems. Fine, the scene isn’t directed in a way that I would think a well-directed scene would be. How did Trish (Catherine Keener) even find out that her daughter Marla (Kat Dennings) wants to have sex? How are they still yelling at each other in between Andy’s bike ride to her house? How near does she live from the store? However, this is a comedy, and I don’t know the rules for that yet. And you know what, I like Catherine Keener here. She bellows at her daughter, believably softens a little to Andy and to figure out what Marla is saying and gradually brings her volume back up for Marla. Watching them go at each other makes my throat hurt.

I love the exchange here.”Oh, mistake. Okay, so I was a mistake then?” “Oh, you’re not a mistake. Your sister was the mistake!” Or “Oh my God, are you kidding? We never have sex! Do we ever have sex?” “No we don’t.” “Ah-ha!” “What?! You do, you’re such a liar! Why are you lying to me! Why?” And Marla says something about boyfriend and go. They realistically show their emotions on top of their lines. Some fights don’t have high and low volume times, they’re just fights. And one of the greatest ones I’ve seen under 90 seconds.

She shows she has a life outside and before her boyfriend. It’s arguable that she is or isn’t a perfect mother but she’s protective and has good intentions. Trish is comfortable enough to introduce Andy to her ‘real family,’ opening up to her flaws. She asks “Oh God, you wanna run away, don’t you?” and like a gentleman, Andy doesn’t. Because Andy has his own flaws and secrets too.

This entry was posted on October 14, 2010 by paolocase. It was filed under Movies and was tagged with 2005, Catherine Keener, Judd Apatow, Kat Dennings, scenes, Steve Carrell.