The Marcoses have supported the arts including, shockingly, subversive B-films that put his dictatorship in question. One of the first voices we hear in Mark Hartley’s documentary Machete Maidens Unleashed! is director John Landis, poking light fun at the taglines that got people in the drive-ins screening those B films. The film is the story of American B film-making in the Philippines. B directors, American and Filipino ones mostly under Roger Corman reminisce about the golden age of the B film, talking about large breasts as selling points for these films. Touchy, off-putting conversation, but hang in there. 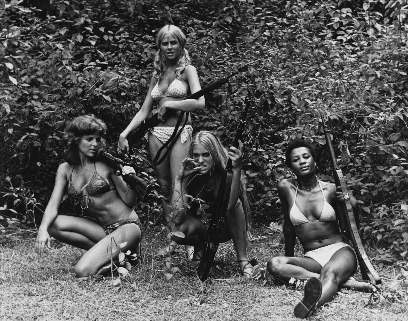 The film also paints Corman as someone who goes through phases of genres lasting a year. It’s hard to find differences between genres because the cast looks the same, but there are war films to horror to jungle prison films where the Stanislavsky trained Pam Grier got her start.The female leads feel ambivalent towards their work, from Grier’s humourous take on it to others shocked at how DVD’s will put their past into permanence to one who points out how these films gave more decent work to black actresses in the 70’s.

I also wanna point out how little interference Hartley has with the tone, keeping it groovy even if the subject is exploitation or violent conditions in the Philippines. He doesn’t force a bleeding heart over the death of a stuntman. The ones interviewed have honest reactions of maturity about the films’ accident prone shooting conditions. I call it refreshingly educational. 4/5.

This entry was posted on September 19, 2010 by paolocase. It was filed under Movies and was tagged with 2010, comedy, Documentary, fierce, imperialism, John Landis, Pam Grier, Philippines, Roger Corman, The Fame Monster, TIFF10.