Mad Men Before and After

Taking in the new office of the new Sterling Cooper Draper Pryce, I thought that the fourth season of Mad Men means that the show can’t turn back the clock. The season’s sixth episode, “Waldorf Stories,” proved me wrong. It’s character instead of plot for this episode, a challenge to the actors like Christina Hendricks, Jon Hamm and January Jones to regain the glint in the eyes that the characters have had five years ago or so. The more cynical of us think that this episode is written specifically so that the Academy can see that the three deserve Emmy’s already, for Christ sakes.

Before. Don Draper circa 1959 [ETA: Christopher Rosen and S.T. Van Airsdale talked theories, and now I think it’s 1953], telling just another customer, Roger Sterling (John Slattery), what ‘we’re’ gonna do. His pitch is one of the show’s cruxes, ‘what women want,’ yet here it is about a mistress and not a mother.

After. Draper in 1965 is award-winning but more rudimentary and uninspired, trying to wing the presentation with talk of adult ‘irony.’

Before: Roger Sterling and Joan Holloway in private, treating the fur coat with more importance than the ‘genius’ who has sold it, giving each other ‘one gift at a time.’

After. Joan is Joan Harris. Appearing together in public, Joan speaks on behalf of Roger, no longer taking his shit and eventually leaving him drunk in the bar. 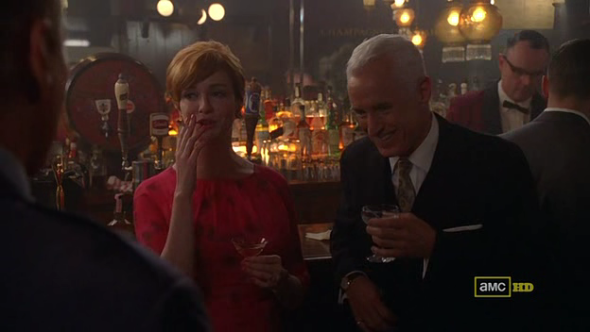 Before. Betty Hofstadt, cold. Her slogan represents independence and her face exudes hope. If you notice, for some reason Betty has the blonde version of Joan’s curly, longer hair. Overread that, if you like.

After, her name is Betty Draper Francis, fuming, reminding Don that ‘It IS Sunday.’ She divorced, yet ironically still dependent on her first husband.