In between watching movies from the Wright Stuff series and watching Scott Pilgrim, I watched another hipster romance movie – Marie Antoinette. Before I get to the meat of this post, I just wanna say that I have to discuss the traces of what I have read or heard about the woman whose life this movie is depicting, and how true this movie is to the life of said murdered queen – if I used the word executed it means she deserved it, which she partly didn’t. Some people believe that the dead are fair game, but then we’re talking about one of the most slandered women in history, so every time Coppola or the film trips, we deduct a point.

I remember the pre-blogging glory days of trying to defend this movie while calling out the royalists who trolled the Marie Antoinette forum on iMDb. That was where I read someone who compared the movie to a series of paintings. And probably where I read someone mistake Marie Antoinette’s (Kirsten Dunst) alleged Swedish boy toy Count Axel von Fersen (Jamie Dornan) as Napoleon. And/or make a comparison between Madame du Barry (Asia Argento) as a Disney evil queen – she did NOT look like that nor act like she was depicted in the film, by the way. There are other directors who make a collage of pop culture references in their work. Those anonymous readings, however, show that Coppola isn’t able to mold those separate images and/or incorporate them into what should be a believable and seamless biopic. I don’t fully believe that it would have been a better decision to invent her own images of these people instead recycling old/different/inaccurate ones, but I’d imagine there’s some who watched this movie who would choose the former over the latter.The movie has always felt like ‘This is what I imagine her life to be,’ which has driven a lot of history nuts crazy.

Need to remind you guys that Coppola’s direction of the character Marie Antoinette evoked Paris Hilton. And being inundated by that comparison by the media, oh my God. Which leads us to Coppola’s apparent aim of turning Marie Antoinette’s story as a satire of the nepotism – biting the hand – and decadence of the government and celebrity culture of Bush-era US. Which is great, but why can’t Marie Antoinette simply be Marie Antoinette? 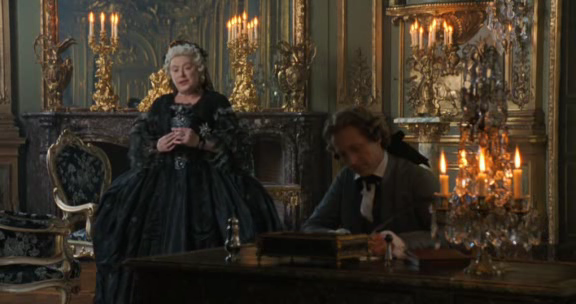 What is different between 18th century Versailles and 21st century America is the treatment of children’s sexuality. Adults both blue and red-blooded obsessed over Marie Antoinette as a sexual being. It’s tragic how her mother, Maria Theresa (Marianne Faithful) has fought for and keep the crown of the Holy Roman Empire as a woman and became the most powerful woman in Europe after Catherine the Great, only for her daughter to be trampled so easily. Coppola gets it right in this movie by actually showing the ‘people of France’s’ real problem with Marie Antoinette – that it dragged on before she was able to produce an heir. And how full the operating room was when Marie gave birth to, unfortunately, Therese. Also consider the hypocrisy of spying on adolescents’ bedroom action and the Christian notion of not talking about sex and not teaching the poor couple how to have sex.

Marie eventually becomes corrupted by this oversexualized society, having knowledge of her grandfather-in-law King Louis XIV’s (Rip Torn) affair with Du Barry. Marie then derides this fake aristocrat. In Coppola’s film, she unknowingly she becomes just like Du Barry, carrying out her own affair with the Swede.

Today, a 14 year old’s responsibility is his or her homework and some household chore. Marie, turning 14 when she did, has had a quick transition between childhood and adulthood, just like that insufficient carriage ride to the French border. At least two years into adulthood in that day’s standards, she has a responsibility that reminds her that she is still a second class citizen under Salic law. No wonder, as Coppola shows in the film, Marie regresses.

Flaw – The scene when Marie walks with Austrian Ambassador Mercy (Steve Coogan) and Therese in the gardens. The Princess du Lamballe (Mary Nighy) runs to the three and informs them of the Austrian Empress’s death. How did the Austrian ambassador not know that first?

—
In Roger Ebert‘s review of this film, his second point called Kirsten Dunst as Marie Antoinette as ‘pitch-perfect casting.’ It’s not Interview with a Vampire, or to compare it to the other performances that year, she’s no Penelope Cruz. It’s wonderful watching Dunst’s face react to her husband King Louis XVI (Jason Schwartzman) wolf down his food, or how her face reaches us through that infamous zoom out, saying a lot while standing still. Having to go across the palace to a private room where she could cry or fawn – a measured release of emotion from one place to another. Worn down after the deaths in her family. Her poised diplomatic voice as she talks to her husband’s cabinet and even to her own brother, the Holy Roman Emperor (Danny Huston). As some blog I used to read has said in defense of her performance, Dunst was obedient to Coppola’s vision. 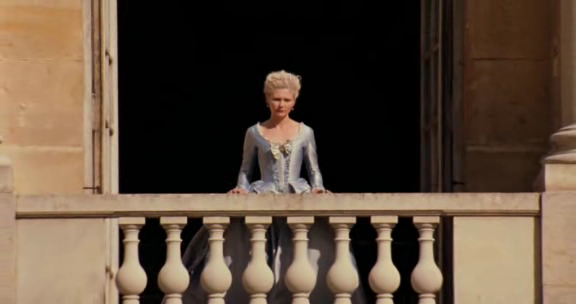