First saw in a post by Brad Brevet. Youtube version posted by Christopher Campbell. Click on either in case my embed effing troubleshoots. Valerie Plame‘s (Naomi Watts) husband Joe Wilson (Sean Penn) tries to reveal that there are no weapons of mass destruction in Iraq. As a way to discredit and ruin him, they try to get to his wife and blow her cover as a CIA agent. Comes out November 5 in limited, and November 12 in wide release in the US. No known dates for Canada yet.

It’s strange how Summit Entertainment is the distributor both to the Twilight Saga and to ‘anti-American/anti-Republican films’ like Hurt Locker, Ghost Writer, and now this.

Naomi Watts is amazing at making an all-American girl seem fascinating and multi-layered. That scene in the car is worth the ticket price.

The second time Naomi Watts and Sean Penn – perfectly cast as Joe Wilson – playing love interests in a film, the first being 21 Grams, but her name’s the one on the marquee. But then I’m sure many of you would rather see her with Laura Harring again.

That music is too cliched.

There’s probably just as much or more Iraq/Gulf war movies set in Washington as it is in the war zones.

Doug Liman’s name also keeps popping up in the blogs just as much as the stars of the film. He’s directed two clunkers before this one, but as classy First Lady Michelle Obama said, ‘Don’t screw it up, buddy.’

Un Chien Andalou (1927) – Starting in one place and ending in another.

Looney Tunes (1930-1969) – Pointed out by Brad Brevet. Fight captions, as well as Scott leaving through the window.

The Lady Eve (1941) – Barbara Stanwyck reveals her many – fictional – exes to her new husband on public transportation. In the original graphic novel, Ramona does this on the Yonge-Finch subway train. Ha! 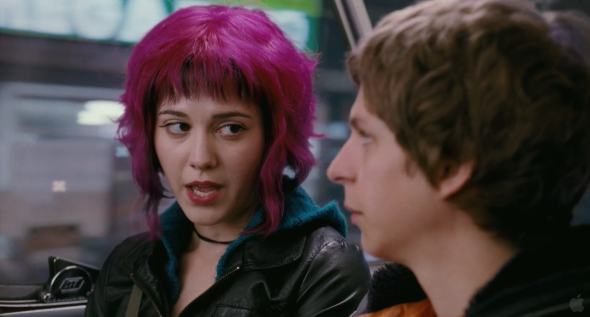 Singin’ in the Rain (1952) – Goofball bursts through painted backdrop. Also, love triangle between histrionic and ‘intellectual.’

The Searchers (1956) – Roxy Richter is Scar and Michael Cera is John Wayne and Jeffrey Hunter in the same person?

Vertigo (1958) – John’s Ferren’s thin white whirlpool. [ETA: Also, zoom in dolly out when Scott and Lucas Lee run to each other and fight.]

Ferris Bueller’s Day Off (1989) – Scott apparently modeled between Ferris and the other guy.

Riki-Oh (1991) – Hero fights hunks first before fighting skinny Asian dudes. What the fuck is up with that?

Dracula ’92 – Enemy evaporates at will?

Rushmore (1998) – Dweeb in a love triangle between white girl and Asian.

American Beauty (1999) – But instead of roses, there’s a shower of hearts.

Fight Club (1999) – Protagonist fights many enemies and eventually has a fight with SPOILER himself.

High Fidelity (2000) – Pretentious CD store with rude customer service – the Sonic Boom people are nice, by the way – and movie about exes and the one true love.

Phone Booth (2002) – By the way, there is no phone booth like that in Bloor and Bathurst.

“Arrested Development” (2003) – Apparently Michael Cera and the lesbian ex dated in a string of episodes.

Pirates of the Caribbean: The Curse of the Black Pearl (2003) – Pirates are in this year!

Eternal Sunshine of the Spotless Mind (2004) – Dweeb hooks up with girl who changes her hair colour a lot. 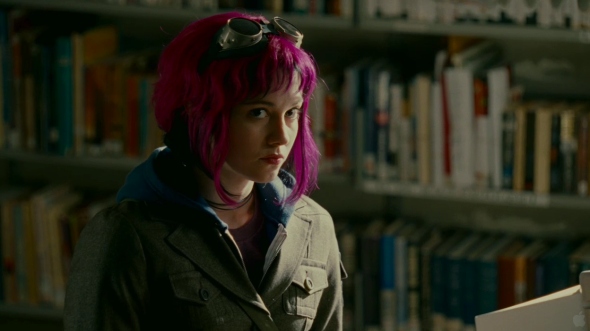 Shaun of the Dead (2004) – MegaScott kinda looks like Zombie Ed. 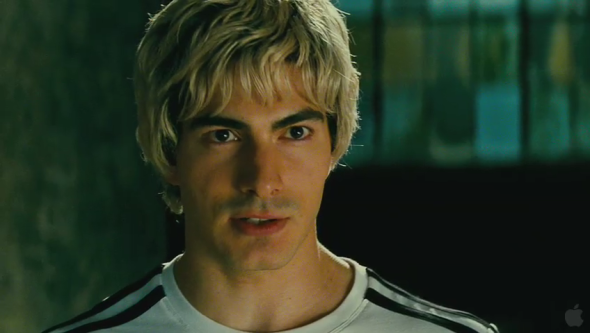 Up in the Air (2009) – Anna Kendrick reuses her archetypal role as the younger but sane one.

Armond White is correct, okay? There are tons of movie references. If I wanna over-read these references, most of the recognizable are from movies made in the past decade, which means that these movies are worth referring to. Despite my pessimism, new movies aren’t so bad after all.

Yes, it underperformed at the box office, probably because of  apprehensions, as Peter Martin points out, that the references do target the ‘video game generation.’ The first reference I pointed out is from 1927. I don’t know if that helps ‘people over 30’ to be herded into the theatres, but if I could see a relationship to pop culture before video games, hopefully someone else will.