But Melanie … Ralston … Is A Badass Too

I love how every stoner posits him or herself as a medical or legal expert, such as Melanie Ralston (Bridget Fonda) in Jackie Brown. You’ve had one of those in your social circle.

Coughing’s good! It opens up the capillaries. You know, when you cough you’re pulling in air, or in this case – smoke, into parts of the lungs that don’t normally get used. So, coughing’s good, it gets you higher.

I mean, she’s white. She must have gone to college or something. And Fonda never hesitates nor clings on a word and just lets them fly out of her mouth with such certainty and security. While depicting drug addicts or questionables or damaged an actress can either go shrew or 33 variations of victim, and thankfully she’s neither.

For some reason, everybody watched Jackie Brown last Tuesday or Thursday nights when it was on at CBC at one in the morning. I only caught the last two hours of it, but I remember past viewings when Samuel L. Jackson shoots Chris Tucker. And by watching the rest, I guess I get the picture. I just love Bridget Fonda’s performance and character here so much. I’m not alone. She’s well-traveled, liberated, subversive. I had to blog her.

Quentin Tarantino is a great director in a technical side, deftly showing his audience the shot-counter shot relationship through Melanie, such as shot.

Melanie?
Jackie?
Hey, girl, what’s up?
Hey, are you getting that suit?
Yeah. You like it?
It looks really good on you.
You got something for me?
You betcha.
I put a cherry on top. Booh-yah! 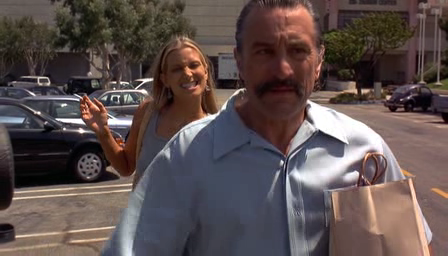 Melanie the character also has one of the greatest swan song in movies. Melanie started this precedent of women dying awesome in Tarantino’s oeuvre. O-Ren Ishii’s (Lucy Liu) decapitation, Elle Driver (Darryl Hannah) losing an eye, Bridget von Hammersmarck (Diane Kruger) getting strangled. For Melanie it all started with ‘Louisss…Lou-isss…’

And she gets shot. The end!