Ran – a movie about an aging Japanese warlord Lord Hidetora “Tora” Ichimonji (Tatsuya Nakadai), patterned after the Shakespearean tragedy King Lear –  stayed on the grassy hilltops for twenty minutes. I would like to think that I can bear with long scenes with just dialogue but maybe this movie might prove that I just can’t. Is it Kurosawa’s meditative pace again, or the language barrier?

The film’s galvanizing point is when Tora’s ex-right hand man Tango tells him that the latter’s eldest son Taro barred the villages from serving him rice just after he ordered to burn said villages for being presumptuous in their ‘charity.’ He also hears Tango’s interpretation of the third son Saburo’s actions after the latter’s estrangement. His actions alienates the villagers just as it does to his sons. The movie becomes a great one with that scene and every other scene that follows that.

I was also utterly disappointed with the replacement of daughters with sons. The only Kurosawa film I know that has the most/best female characters is his adaptation of Dostoyevsky’s The Idiot. I’m not an expert of Japanese culture so I wouldn’t know what would have happened to Tora’s daughters, or he married off those daughters, or if he had to made his wife and concubines suffer to produce three sons.  I concede that I like the characterization of the sons. Taro is ambitious,disrespectful and affected. Jiro is weak. Saburo is coarse yet loyal. I vaguely remember Shakespeare’s characterization of Regan and Goneril, except for evil and more evil. From what I remember, Regan asks “What need one [attendant for Lear],” which can either be interpreted as cruel or cowering. She shares one or two more bitter arguments with Lear than Goneril did. And Cordelia’s, you know, silent. Back to the film, this was a wasted opportunity for Kurosawa to explore female characters.

But fine, Lady Kaede (Mieko Harada) is an audience favourite. Having read a lot about her explosive, gutsy performance from Sarah Boslaugh, Harada impresses when she reveals her hatred against Tora. I kept wondering where she was through the stretches of bloodshed that the men have committed. Then she lunges at Jiro. She closes the doors to the Lord’s room while she laughs, not caring if anyone in the palace might hear her. She blackmails Jiro, tears her own kimono with a knife, then kisses Jiro and the wounds she gave him. It’s an extraordinary scene and it feels like watching something demonic for the very first time. 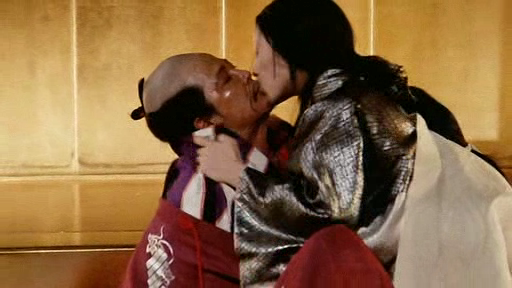 Kaede, then, is Goneril and Regan lumped into one, having to marry to satisfy the lord of the household and therefore appease a patriarchal society, conniving herself from husband, finally owning her family’s castle for at least a short while. She’s also one of the characters that remind the audience of the Shakespearean tragedy’s worldview. Nothing that the hero or anti-hero owns is rightfully theirs, that any property has a lengthy history of thefts, and that just as many wars have conquered nations and killed kings, vengeance after vengeance will come. She’s also a Lady MacBeth in a sense that she’s chosen to become this evil and ruthless to survive the society that would otherwise spit her out. Lady MacBeth because Ran has a Lady MacDuff in the form of Lady Sue, the latter being pure, forgiving and altruistic even if she goes through the same thing as Kaede. The film has one great female character and her foil, but there could have been more. 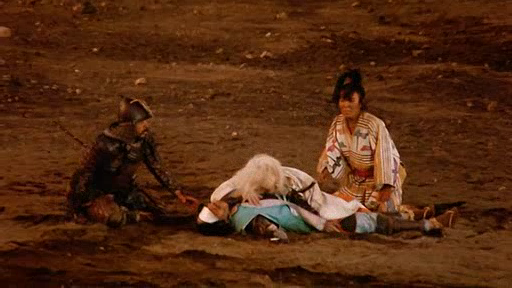 Unlike Lear and the Fool, Tora and Kyoami have a strained relationship. Tora hits him. Kyoami’s the only person who calls Hidetora ‘Tora.’ At first, Kyoami is able to joke about Tora’s madness, but frustration sets in. Tango and Saburo are loyal to Tora, but it’s like Kyoami’s the only person who actually loves Tora. He wants to leave but can’t. Tora’s death devastates Kyoami while Tango’s stoic. Kyoami’s adrogyny – and Tora’s ghostly concubines – lets him emote unlike the other male characters in the film and puts a bit of subtext to the relationship, if you’re looking for one.

Almost every shot in this movie is a painting.

This was pretty badass. 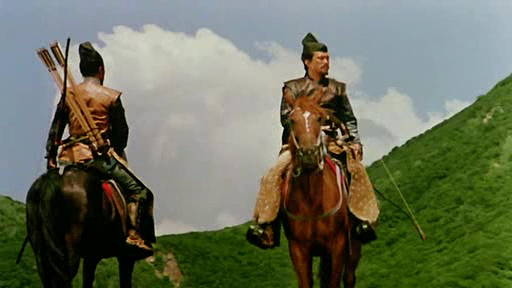 I guess beginning the film in grassy hilltops makes sense. We drink in the scenery. In the end all we have are red crags, where Lady Sue’s blinded brother is stranded. He gets his land back but it feels more like limbo instead of a vindicated end. He’s a footnote in this land’s bloody history.

This entry was posted on July 20, 2010 by paolocase. It was filed under Movies and was tagged with 1985, crazy dead wife, death, female characters, Japan, Kurosawa, Lear, Shakespeare, shrew, war.