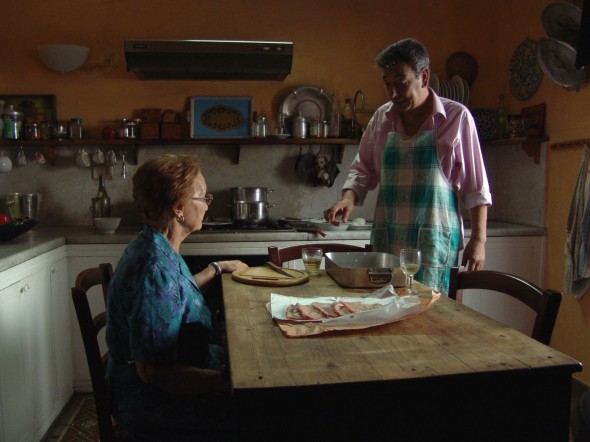 I saw “Mid-August Lunch” at its last day at the Royal, and I really hope it gets a second life in this city. Looking like a complex postcard, it succinctly tells the audience what they needs to know about the movie’s characters, who can present enough back story with a sentence or two.

Nonetheless this movie’s also a double-handed text in gender, with an unemployed Gianni and the four elderly women in his rustic condominium. He reluctantly lets them stay over for two days in the Ferragosto holiday, but he already has a lot on his hands. The women dominate him and he tries to keep their medications and diets in mind. At the same time they’re trying to dominate each other with passive aggressive talk about how Gianni’s mother Valeria raised him.

We do have to consider that men did leave three other elderly women for him to take care for. The special arrangements are negotiated because Gianni owes money to them. His doctor prefers to spend time with his wife and children, while his property manager says what the doctor is saying while running off with a blond woman who can’t possibly be his daughter. The grandmothers then, feel a little abandoned. In essence this movie’s about men dominating women dominating a man left behind.

The exquisite nature of the movie relies on how they deal with these emotions, sometimes distilling them or dissociating them. They eat and smoke not with purpose but as routine. Gianni downs his drinks without looking like an alcoholic – he’s in control but he really needs this break, now. And they try to have fun with the little things they do have like meals and dances.

And for a last thought, forget “The Girl with the Dragon Tattoo,” because this movie’s perfect for a Hollywood remake. I don’t know how the holidays and the business rules are gonna translate, but the main plot and cast is good enough. Try it, suits!