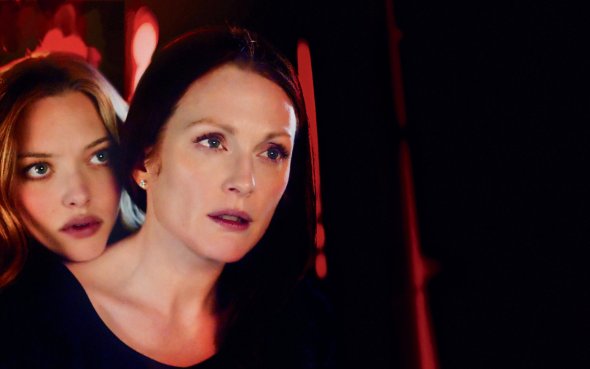 (All relative to the size of your steeple. ph. OutNow)

Atom Egoyan has the benefit of a conventionally beautiful Hollywood cast and make them straddle between that and the common non celebrities that they were playing. The bridge in Chloe’s (Amanda Seyfried) nose disappears, Catherine (Julianne Moore) is Freckle City, David (Liam Neeson) looks like the typical British person who moves to Toronto and says “soccer” – yes, those people exist and they piss me off. Michael looks like the Torontonian with one or two weird features. Not saying that white people in Toronto have weird features, the upper middle class are beautiful and Nordic, just like half of the cast members I talked about. And there’s also the name dropping of certain places that makes me feel like this is supposed to be some twisted love letter to Toronto or something.

There is an honestly good scene between Catherine and David putting all the cards in the table. They talk over each other, they say everything with conviction, they’re neither loud or campy enough to get the attention of everyone else in the cafe. But Chloe has to show up and ruin every other scene she’s in.

And I guess it’s my Torontonian cynicism about sex and adultery. Good examples either rationalize the act, that their partners are neglectful or that the adulterers have a memory they like to cling to. Most of the time in this movie I just kept shaking my head at these fucking idiots.

Listen Atom Egoyan. I know where you hang out, and when I see you I will panhandle the shit out of you. At least George Clooney is good enough to those who saw his Batman in theatres.

This entry was posted on April 15, 2010 by paolocase. It was filed under Movies and was tagged with 2009, Amanda Seyfried, Atom Egoyan, highly dislike, Julianne Moore, no, not good enough, O Canada, Queer Cinema, ridiculous, Toronto, women.