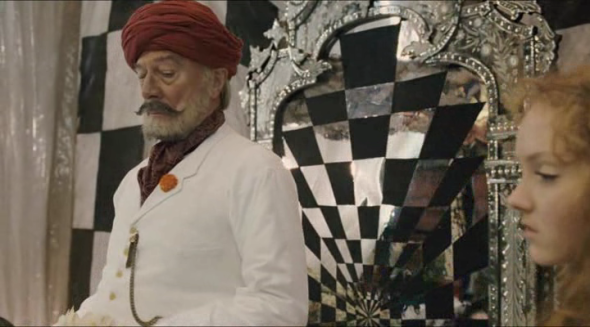 During the first half of “The Imaginarium of Doctor Parnassus”, I asked myself “Where was this going,” “When is it gonna end.” Terry Gilliam films promise you a lot of fantasy but the first half shows in the aughties’ version of grunge – alcohol, London traffic, tattered costumes, all three revolving around the travelling circus, especially the immortal Parnassus (Christopher Plummer), the film’s troubled storyteller. He has lost control of his show, the world has lost interest in his stories. Add Tony (Heath Ledger) to the mix and his presence and suggestions add conflict to the other members of the cast-in-wagon (Andrew Garfield, for instance).

A part of ‘Parnassus” also feels like a perfume ad, Valentina (Lily Cole) floating in the air, her dress swirling, her arms reaching towards the oversized flowers and high-heeled shoes while Imaginarium Tony (Johnny Depp) dances with an elderly woman. That doesn’t mean I have a prejudice against this former model, it’s the other way around. Nonetheless, the occasionally frustrating glimpses in the imaginarium are a bit distant and CGI for me to look at it with wonder. 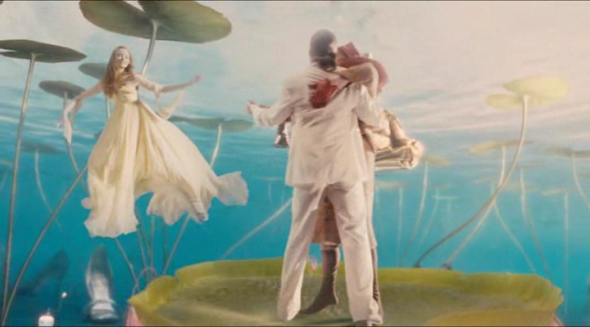 The Imaginarium Tonys (also Jude Law and Colin Farrell), despite being a part of the fantasy world, actually grounds the film. The most emotionally gripping parts of the film are when Tonys personal troubles follow him in the imaginarium. It would have been nice to see Heath in these parts because they’re the meatier part of the role, but the incorporation of four actors in one role is well done.

The film ends with Plummer being another beggar, the fantasy world gone. His old friend Percy (Verne Toryer, not a cameo) wonders if the beggar is the Great Doctor Parnassus. Is greatness compromised when life drags on?

I also caught “The Last Station” this past Wednesday, which was a little more even. The peaks and valleys of each character are charted in placed where you will know to find them. If I did not end up watching the film, it would be immortalised in my mind as the one where Countess Sofya Tolstaya (Helen Mirren) breaks plates and shoots a gun as shown in the trailers. It’s more than that, but there’s still some genre conventions within it. Got a problem with melodrama?

I wanna talk about the nuances in James MacAvoy as Valentin Bulgakov, the way MacAvoy is the best male crier in the industry, this time keeping himself still yet making the moment raw. How the film does not take his away from a shot when he goes from one emotion to another. How the other characters does not allow him to evolve from a spineless intellectual. How a beard does not make a man.

Helen Mirren also makes me doubt my choice as putting Gabourey Sidibe as my Oscar choice, although Sidibe is still number one. Sofya makes the characters around her listen to every word without making it look wink-wink nudge-nudge. You sympathize with her as extremist Tolstoyans like Vladimir Chertkov (Paul Giamatti) try to take away her influence from her husband. Yet her last request to her husband to come home with her still sounds duplicitous.

We see the film in Bulgakov’s eyes. However, as much as all these characters tugging at each other is sometimes fun to watch, but I still wonder who is the centre in all this intrigue.

This entry was posted on March 25, 2010 by paolocase. It was filed under Movies and was tagged with 2009, British actresses, Christopher Plummer, Colin Farrell, double bill, Heath Ledger, Helen Mirren, Oscars 09, Russia, Terry Gilliam.