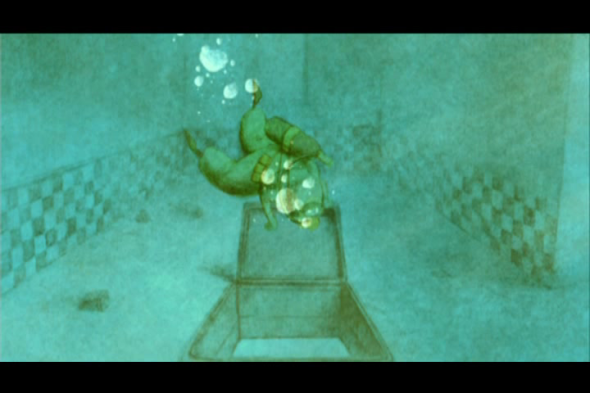 Through the Toronto Japanese Short Film Festival that wrapped up this past weekend, I finally saw the Oscar-winning “La Maison en Petit Cubes,” which is what I imagine what “Up” would be. Yes, I haven’t seen “Up.” It can wait when it premieres on Teletoon. Shoot me.

It’s about a self-sufficient old man who has outlived his adult children. It’s about seeing a man and as he scuba dives down to submerged foundations of his home, we come with him and see his lives the way he does and the way we never get to towards other people. He looks at the foundations of the homes around him and imagines them as the scattered farm houses of his youth. At first we ask why this fictional world exists in this state, but eventually we just go with the emotional ride. Screening this short after “Gaki” puts in context the Japanese skill in parchment, because stereotyping is faster. Or I could be an asshole and say that this movie is about global warming.

La Maison in Petit Cubes is part of a program in the festival I assume as the animated short category. Also in the program is the cute overload of “Komaneko -The Curious Cat- ‘The First Step’ ” and “Mitsuko’s Freedom,” which is by far the weirdest homoerotic thing I’ve ever seen in my life.

This entry was posted on March 21, 2010 by paolocase. It was filed under Movies and was tagged with 2008, animation, francophile, Japan, old people movie, Oscars.