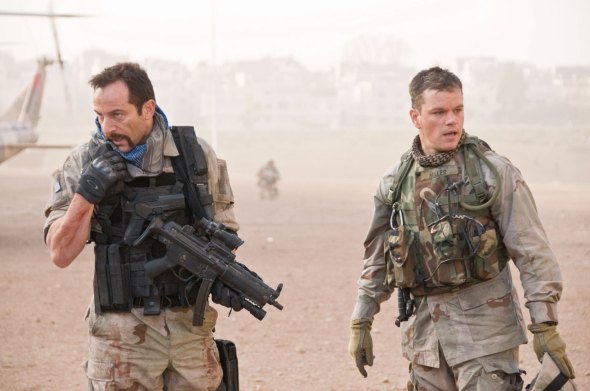 I hate comparing one movie with another, but genre theory kind of makes it inevitable. A movie fits a certain canon and either adds to it or does nothing.

Take “Green Zone,” for instance. It’s Hollywood’s rendition of war realism with its share of above average acting and characters, especially with the Middle Eastern players. In other films they’re either raving, invisible, or emasculated. Here, they’re still yelling as loud as the American soldiers, but their anger’s is more intelligent and articulated. General Al-Rawi’s (Yigal Naor) scene with Officer Roy Miller (Matt Damon) especially powerful since it notes the miscommunication on both sides. The movie also introduces an Uncle Tom with a twist in Freddy, a man who ends up being Miller’s interpreter and has his own motivations. The movie also shows the cat and mouse game that’s perfect for urban areas like Baghdad.

The problem in this movie? The yelling. And the gunfire. And the explosion. And the loud score. We get it, invading a Middle Eastern city is loud and messy. But you gotta pace it. In a way, I understand what Iraqis went through just because of the use of sound in this movie. Roger Ebert was all for it and manages to make me feel old, thanks. It was like an hour of gunfire and loud vehicles before I got some rest out of this movie. John Powell should also calm down in the music department. I can already understand how tense the sites are in 2003 Baghdad through diagetic noise, we don’t need synthesized guitar to accentuate that. There’s also no need for the synthesized violins whenever somebody gets preachy. Another thing is the use of digital footage, making the night scenes grainy.

“The Hurt Locker,” on the other hand, is a better example of the Iraq war movie although the treatment of characters aren’t perfect. The Iraqis are always two arms length and aren’t the most verbose people. But then again the Americans aren’t either. The closest thing this movie ever gets to reciting three acts of Hamlet is Sgt. Sanborn (the snubbed Anthony Mackie).

Will James (Jeremy Renner) on the other hand, has this superhuman zen calmness while trying to diffuse a bomb. I guess I had to bring up “The Hurt Locker” because of the sound because it helps characterize James’ demeanor despite of the tense situation. It’s been a long time since I’ve seen it, but the closest comparison I can come up with is “Jaws.” There were like these long, deep notes playing in the background in the bomb scenes. Without these I’d assume that I wouldn’t hear a pin drop in these scenes, especially since there’s so much cerebral musculature involved in James’ job. He would probably want to concentrate on as few things as possible.

Both movies use puzzles and mazes as metaphors to describe the invasion in Iraq. For “Green Zone,” it’s finding a general in the streets of Baghdad. For “The Hurt Locker,” clipping the right wire in a bomb. Both are easy to execute, but like they said in Serious Film, those missions don’t solve anything. 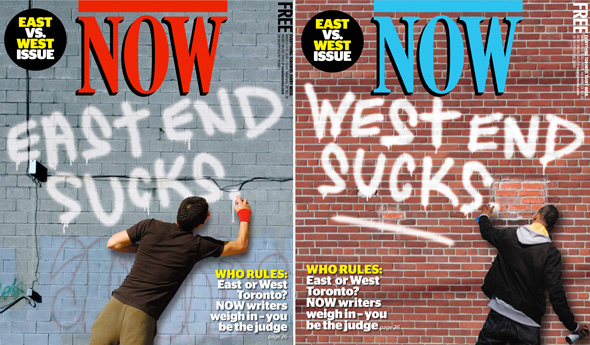 NOW Magazine released their new issue last Thursday about the good things about living in either the West End or East End, although teh cover’s pretty antagonistic.

I can’t find this article I’m citing right now, but didn’t the Star have articles about this too? Instead of Yonge Street, they wrote the Don Valley/River is where the city’s divided. Which makes sense, because I don’t think anyone from Kingston Road can get along with somebody from Church Street. BlogTO makes the same assessment and even have theories of how else the city is divided.

I live in the East End, and yes it is boring here. Nobody knows how to dress here. But we do have the hermits in the Bridle Path.